The people we serve have rich stories of their own that they generously allow us to share from time to time. Here are some of those stories.

Cover image of Caught in the Crosshairs

William (Bill) Cawker is a father and grandfather with a newly developed passion for writing. Bill is also a brain injury survivor. He is a twin and was born prematurely and needed to have open heart surgery at 5 weeks of age. He has spent most of his life dealing with health issues.

Although Bill endured many challenges, he completed Grade 12 and a course for residential-care aid. As Bill’s health declined, he was no longer able to continue with this line of work. Not to be defeated, he went on to work in picture framing shops and eventually owned and operated his own framing business. In 2005, Bill had a cerebral cyst removed. The following year he needed a permanent shunt placed in the brain for drainage. In 2010, he experienced significant hearing loss and was no longer able to work. This left Bill to find a ‘new life’ for himself.

Bill has been residing at Mary Cridge Manor and participating in the brain injury rehabilitation program for the last two years. During this time, a character with the name Tony Marconi popped into Bill’s head one day. He decided to explore who the character was and what kind of story he could create. With the encouragement of Greg Goldberg, who is also an author and contracts as a mentor in the program, Bill developed Tony Marconi’s character and story line. He has now completed and self-published a 166 page novel titled Caught in the Crosshairs.

“I wanted the character and the book to be positive,” explains Bill. “So although the character was in the Mafia, he does change. He attends a funeral and this makes him reflect on his life and the crimes he committed. During his reflection he has an encounter with God, so to speak, and turns his life around.”

On February 26, 2014, Bill will celebrate this accomplishment with a book launch and signing. He is already working on the sequel and has plans for many more books, including a series of children’s books for his granddaughter.

Last year as Pre-school wrapped up in June, Child Care Manager Paula West-Patrick had a discussion with Christine, a pre-school teacher, about ways they could incorporate more music and present more Christian content into our programs. Christine reminisced about the days when child care staff and children  would gather in the gym for Praise Days. At that point they decided that this would be a goal for September.

The department purchased a small keyboard, and Tanya  (Christine’s pre-school teaching partner) and Christine set about creating a program of celebration of God’s love for each of us through music, movement and story. The plan was to combine day care and pre-school classes twice a month for 15 minutes to start and work up to half an hour each time.

The program has been quite successful. Children who were uninterested in September are now asking when the next Praise Day is. Each class has been provided with a CD and the children are singing the songs every day. “Let’s sing and dance and shout!” is the opening song and one of the children’s favorites.

At the last session Christine read a story about prayer. When she asked the group what they thought prayer meant one little 4 yr old boy who is very shy immediately put his hand up and when asked to, said “It is when you’re scared and you can talk to God and he makes you not be afraid anymore.” It is so good to hear these comments from the children and know that God is making an impression in their lives. 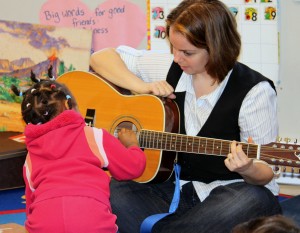