Select from the links below to visit our various programs 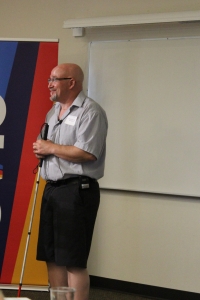 In 2006, Robin Bienvenu, from Duncan, B.C., believed he was set for life. In fact, he didn’t think it could possibly get any better. He was working as a city bus driver 30 hours a week and he owned and operated a thriving outdoor paintball business. He and his partner of five years, Anna, were the proud parents of a beautiful, healthy boy named Dayne. They were planning to marry and purchase a house. In one afternoon, their lives changed unexpectedly.

On March 5, 2007, Robin came home from work and stretched out on the sofa because he was not feeling well. While sleeping, he slipped into a coma and didn’t wake up for 48 days.

Robin was involved in Martial Arts all of his life and worked hard to be fit and healthy. There had been no indication that anything was wrong or amiss with his health. Anna came home and found him asleep on the couch. When she couldn’t rouse him, she knew that something was terribly wrong and called for help. Initially, it was believed that Robin had meningitis and had he been treated for that he would have died.

Robin had contracted a rare illness called Acute Disseminated Encephalomyelitis (ADEM). ADEM is an M.S. (multiple sclerosis) type event where the myelin sheath of the central nervous system is destroyed. Doctors are uncertain of the exact cause of the illness. It usually happens in people that are very old, or very young. Robin was almost 45 at the time and did not fit into either category, making it a challenge to diagnose.  The majority of ADEM cases result from an infection.

Robin registered three on the Glasgow Coma Scale and his prognosis was bleak. One doctor wanted to “pull the plug” after 3 weeks into a coma that lasted almost 7 weeks. He said that because of the extensive brain damage clearly shown on his MRI and that Robin also had contracted pneumonia if he woke up he would probably be a vegetable. Robin was kept in Victoria General Hospital (VGH) for about one month before being flown to St. Paul’s in Vancouver for plasma fluorosis treatments. Robin returned to VGH after the treatment at St. Paul’s. On April 22 he woke up from his coma. He was completely paralyzed and almost completely blind.

Robin was a “doer” and now he couldn’t move or make sense out of his surroundings or what was happening to him on a daily basis.

After a little over four months in the hospital, Robin signed himself out. He convinced himself, and others, that he would heal quicker at home. “That was a huge mistake,” Robin said. “I was making a lot of poor decisions. I wasn’t quite sure of who I used to be, but I knew I had changed dramatically. It was a very confusing time.”

The End of a Promising Future

In November 2007, Anna moved out and left Robin on a six-acre farm alone. “The most challenging part, for me, was my own stubborn male pride. I didn’t want help. I didn’t want a disability. I couldn’t see but I wouldn’t use a cane.”

Robin moved to Victoria and was able to have neuropsych testing done. “It ended up being 29 pages long,” Robin shares. “But it did say that I could go back to school, so I thought that was cool.”

Robin understood that life was not going back to what it was so he began to rebuild it. No longer paralyzed, but legally blind (Robin can still see out the top left corner in his right eye only) he knew he needed to take the leap and return to school so he could do something different.

A Step Forward in Redesigning Life

In 2009, things really began to shift. Robin was accepted into Camosun College. A year later, Robin was accepted into Mary Cridge Manor (MCM), a Cridge Centre for the Family program offering individual apartments with supports for up to three years. During his MCM time, Robin participated in rehabilitation supports and activities like the Community Kitchen and Community Garden. Robin also worked hard to see his son Dayne, who turned one year old when he was in a coma, as often as possible. And even when he couldn’t see him, Robin called him every evening to see how his day went and to say “goodnight, sweet dreams, I love you”.

Travel to Italy Results in Gold and Silver Medals

Robin has continued to rebuild his life in amazing ways. He traveled to China by himself and he took up Dragon Boat Racing in 2013 through BC Blind Sports. His home team, Outta-sight, is Vancouver Island’s first blind/visually impaired Dragon boat team. Robin was asked to guest paddle with a team from Vancouver, The Eye Of The Dragon. They traveled to Ravenna, Italy, in 2014 to compete in the Worlds Dragon Boat Championships. They did well ~ in their first race, they won gold! And then went on to win a second gold and a silver medal too. “It was really great,” cheers Robin. “Winning the medals was awesome but traveling to another country with 24 other people was lots of fun too. It was definitely a positive highlight in my life.”

The rebuilding didn’t end there…. Robin spoke at the Cridge Centre for the Family and University of Victoria’s Surviving to Thriving 2015 Conference. He started his first semester at UVic soon after returning from Italy. His goal is to become a clinical counselor. “I want to help people and to work with people who have suffered a brain injury.”

Robin’s story is inspirational and shows that there is always hope. Look for the opportunities to receive support and then begin rebuilding. Good luck, Robin! We have no doubt that all you do will be gold!