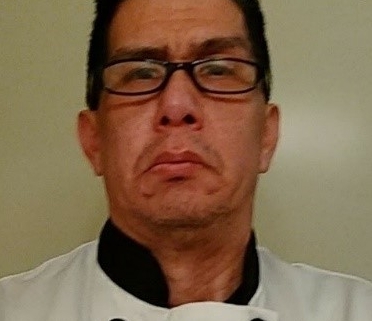 Although Matthew Jack looks serious in this photo, his smile will light up a room. Matt began working in the kitchen at The Cridge Centre for the Family in February 2018. His journey to get here was challenging.
On September 30, 2008, Matt was walking to work at the Embassy Inn. It was only his third day on the job as a cook. Prior to this job, Matt had worked as a Sous Chef at the Sticky Wicket for 9.5 years. While walking, Matt suddenly suffered a generalized tonic-clonic seizure and fell to the curb, hitting the back of his head. The hit to Matt’s head resulted in an epidural hematoma (collection of blood that puts pressure on the brain). Matt underwent surgery that day to remove the hematoma. On October 1st, Matt underwent a second craniotomy because of oozing and blood collecting again.
The road to recovery was long. Matt was in a coma for three weeks. When he woke up, his mom was there, and it was the week before his birthday. Although Matt was in and out of consciousness, he recognized the ICU and remembered thinking he was back in “the fishbowl”. At 5 years of age, Matt underwent surgery to treat an abnormal connection between the esophagus and the trachea called a tracheoesophageal fistula. Matt suffered many bouts of pneumonia growing up, so hospital stays in the ICU were not unfamiliar to him.
Over the next three months, Matt worked hard to recover. He suffered from short-term memory, attention, and concentration issues. His balance was impaired, and he struggled with fatigue and word-finding. On Christmas Eve in 2008, Matt was discharged and went home to his family.
Matt’s family is a very close and loving group. He is one of 9 children. Matt’s brother stepped in and found Matt a new place to live which is close to Victoria General Hospital. He and his cat still live in this unit. Matt’s brother lives close by, so he gets to help with his nieces and nephews and help with chores like cutting the grass for his brother and sister-in-law.
Matt knew he wanted to return to cooking. Leonard Regan from Infocus Rehabilitation Services was working with Matt and knew of the Kale King project at the Cridge. With the blessing of Chef Nik, survivors in the Cridge Brain Injury Services adapted Chef Nik’s much-loved Flourless Chocolate Fudge Cookies to include kale to sell at outdoor markets. Leonard made the introduction and Matt joined the team. Not only did Matt become a star baker for the team, he went on to help prepare, cook and serve meals in the Breakfast and Lunch Programs for the Cridge Daycare and Pacific Christian School.
When asked what attracted him to cooking, Matt replied, “I knew since Grade 5 that I wanted to be a cook. At school, we had to do a project that showed what we wanted to do when we left school. I joined in with a group to make chocolate chip cookies. I think I wanted to be in the group because of the number of girls (insert impish grin) but it also sounded like fun. When I came home from school that day, I told my mom that I wanted to bake cookies for the rest of my life. My mom says I was always in the kitchen after that.”
Although our cookie and food program team were sad to see Matt move on, everyone knew Matt could do more and if he stayed where he was, he wouldn’t reach his maximum potential. When a job as the cook came up in the Cridge kitchen, Matt jumped at the chance to apply.
“I love working at the Cridge. I get to do a lot of different things: cooking, baking, and organizing. I also get to be creative and have input. For example, if my duties for the day are making the vegetables, I can prep and cook them any way that I want. I like that.”
Matt sees himself staying with the Cridge for a long time; however, he holds a dream very close to his heart. Matt would like to open his own place and call it Think Café. His menu will be designed to provide the best nutritional sources of fuel for a person’s brain!

I Want To Be a Rocket Ship