It was a Canada 150 Celebration, a project to join the generations, the young and the old, to make something that reminded them of being a Canadian. With The Cridge Seniors’ Centre Activity Coordinator,  Alison at the helm, and Nancy as the official quilter, twenty-five grade 4 and 5 students from George Jay Elementary School walked up the hill to The Cridge Centre once a week  this spring  to meet with a group of seniors living at the Centre. Their project was to discover what being a Canadian meant to them. Each was tasked with coming up with their own idea which they would ultimately paint onto a square, to become a part of a quilt.

On their first meetings, the seniors and children poured over books of Canada and spoke about their history. The children were fascinated to hear that many of the seniors were born or came from the Prairies. After pouring over the different books of Canada, they began sketching something that reminded them of what it meant to be Canadian. This was a culturally diverse group of children, some were not born in Canada and a class tally discovered there were 7 different languages spoken in their homes.

For some of these students it would be the first time they had met anyone of the seniors’ generation. I was touched to hear the words “grandma” and “grandpa” being used at the encouragement of the seniors. One student, Mary, independently teamed up with a gentleman for some serious talking. He told me that when he first met her he asked about her parents. When she said that she didn’t have a father, he told her that he lost his own mother when he was 4 years old. That sharing of such an intimate fact made for many long conversations for the two of them as the project continued. Walter, with the gruff voice and “old school” demeanor, worked with the largest group of rambunctious children. It was heartening to watch them all band together around him for farewell pictures at the end of the project.

The final project unveiling included a visit from a camera crew from CTV News and baked goodies from George Jay School. The final 25 quilt squares, one drawn and painted by each student, had been sewn into a quilt and bound with a border of Canadian maple leaves. The students were excited and very proud of their work, and some of them posed by the quilt and were interviewed by the CTV camera crew. “What reminds you of being Canadian?”  the CTV commentator asked. Their answers were varied, only a few the same: A beaver, an orca, the Rocky Mountains, the Pacific Ocean. One child had painted the official flower of Newfoundland where her family came from, another a dream-catcher medicine wheel as recognition of Canada’s First Nations. The words First Nations, Peace and Leadership were painted by another. All of the children received a Certificate of Thank You with their name on it, and everyone sat in front of the quilt for a group photo. The certificate read, “In recognition of your willingness and openness to engage, play and connect with new people!  Your creative energy and kindness will always be remembered.”

This project not only opened up opportunities for inter-generational fun, but it also created a wonderful opportunity for children and seniors alike to catch a glimpse of what it means to be Canadian from the opposite end of the age spectrum. We are so grateful for the teachers and students who joined us in this wonderful project! 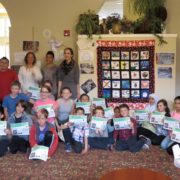 From Abuse to Respect
Scroll to top