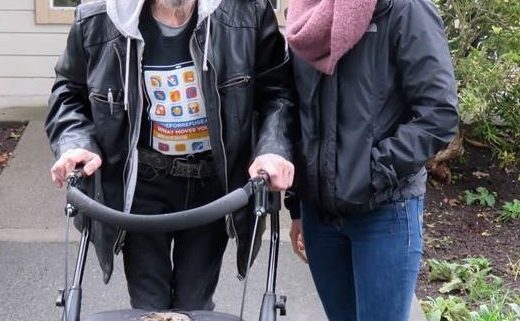 We met at Macdonald House – The Cridge Centre’s home for brain injury survivors. I thought I might need a special code or formal permission to get inside, so I was surprised to find the door unlocked and nobody around as I walked through the large open hallway to the back of the house. It was a quiet home this Tuesday morning, a few people here and there, working on computers and around the kitchen.

The residents were all busy with their routines except for one fellow rustling through newspapers waiting for a ride. At another table sat a young woman playing crib with one of the residents. Listening to their cheerful banter, it was easy to join in. Doug was winning, his second game, he proudly claimed, and he was working hard for another “skunk”, so he told me. The young woman – Emily – bantered back.  You could tell this was something they had done many times before, and she was enjoying herself just as much as he was.

Emily was the woman I had come to interview. She tells me she has been volunteering at Macdonald House for two years. I knew she was a student at the University of Victoria so I asked her if she was volunteering for course credits. She looked at me with surprise. Yes, she is currently completing her undergrad degree, and hoping to be accepted into medical school next fall, but this is something she does because she’s always done it, because she likes to, because it is her way of giving back. In fact, Emily has more than one volunteer job, though she said she has had to cut back this year after taking on a bigger role in a student society on campus.

After finishing her crib game with Doug, she asks Hilton if he is ready for his walk. She reminds him he has time before his ride comes. Hilton is fairly mobile with the use of a walker, so the three of us walk up the road to the park. Along the way he accepts, with thanks, Emily’s gentle reminders about his posture. They, too, have a friendly camaraderie and it is obvious he is very comfortable with her.

Emily tells me that it is these relationships — the quiet exchanges, the knowing glances — this is why she volunteers. It is what she gets back. Though still very young, Emily is already wise enough to point out that it’s only a matter of minutes that separates her – indeed, all of us — from the reality of those who live at Macdonald House, those with brain injuries. This thought reminds her to be humble, she informs me, another gift she gets from volunteering.

With thanks to Vicki for her series of interviews about some of our amazing volunteers, of which she is one!

A Volunteer Moving Team at Work!
Scroll to top