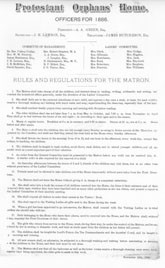 As the number of children being cared for grew, the people running The Home realized that a strict set of rules was needed. By the mid 1880s, a list of 21 rules governed the children’s behaviour.

The children were to be taught the 3 R’s along with sewing and general household affairs. Domestic work was “a most important part of their education”. (Home: pg 45). They were to be taught to wash clothing and dishes, scrub floors, and attend to the younger children.

Scripture readings were to be held every morning and evening, and Grace was to be said before and after each meal. The children were to go to church every Sunday morning, and attend Sunday School at The Home every Sunday afternoon. Children were to be allowed visitors from 2-5 on Saturday afternoon, and at other times with special permission. Permission was also needed if friends wanted to take the children off the grounds.

Each child was to have a bath at least once a week (with warm water and soap!), along with daily cleaning.

Having a set of rules meant that The Home could operate well and fairly, and continue to provide much-needed services to children in Victoria.

This piece is based on the work of Vernon Storey, Terry Worobetz and Henry Kennedy in their book The Home: Orphans’ Home to Family Centre: 1873 to 1998. Copies of the book are available for purchase at The Cridge Centre for the Family.

A Woman Helped
Scroll to top