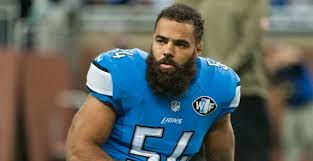 Here are a few excerpts from an excellent article written by Deandra Levy (Detroit Lions) about his observations about sexual assault. Powerful words from a powerful man.

The dehumanization and objectification of women are not issues that are specific to male athletes. They are societal problems. But they tend to be more associated with athletes in part because we are often idolized because of our athletic ability. In many ways, we’re considered models of masculinity, which is at the very root of a lot of these issues. So in honor of Sexual Assault Awareness Month, I want to use my platform as an NFL linebacker to discuss how we talk about rape and sexual assault — because not enough men are.

When I was a freshman in college, I was completely clueless about the true definition of consent, just as I was completely clueless about most things in the world. My first month of school, I remember hearing stories about wild nights in the dorm. One time I heard a group of guys joke about “running a train” on a drunk girl. At the time, my 18-year-old brain didn’t process this as anything bad. Maybe those guys were just engaging in a display of bravado. But what if what they were describing was true? A decade later, I carry guilt for not acting after hearing a story (and many others) that painted a picture of what I would now identify as rape. This speaks to just how toxic and backward the culture around sexual assault still is. I was 18 years old — “man” enough to drive, vote and go to war — but somehow I didn’t have the courage, or the maturity, to see what they were talking about for what it was: a serious crime.

I was pretty ignorant on this topic for a long time. I think a lot of men are, because it’s often talked about as a women’s issue. The focus always seems to be on teaching young women how not to get raped and on what steps they can take to “stay safe.” But why are we not also focused on educating young men about the definition of consent and what constitutes rape? We’re essentially dealing with the problem by telling women to be more careful.

It’s important for men, especially in a hyper-masculine culture that breeds so many assholes, to stand up and challenge the values that have been passed down to us. This is not just a woman’s problem.

As professional athletes, we have the prominence in our communities to effect real change. When we talk, people listen. So in a sense, our general silence on this issue is condoning it.

So let’s change that. Speak out with me. Man up.

The entire article is well worth reading. Click here for the full text.