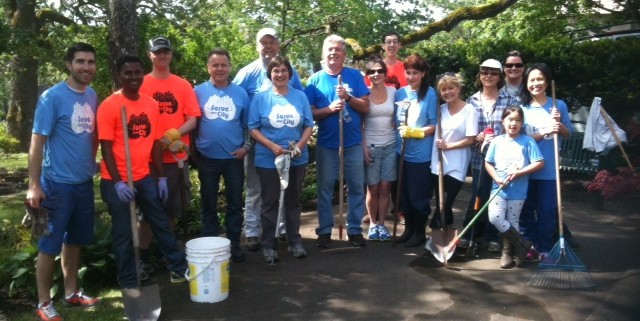 I wanted to share a story about how a donation intertwined with some other great community partners to impact our program this past year.

It all starts with Jennie Butchart. A brief history: Jennie and her husband bought the land at Tod Inlet for the limestone buried there to use for a cement plant. Once one quarry was emptied and abandoned, Jennie decided to create a garden. With the help of some of her husband’s quarrymen and several tonnes of local top soil brought in by horse and buggy, she began her project. It took from 1906 until 1921 until it was complete, but this adventurous and determined woman made it happen. (side note: Jennie Butchart was a certified Chemist who loved hot air ballooning and flying – quite a woman in the early 1900’s!) During that time, and later as she developed the Italian and Rose Gardens, she and her husband were known for their hospitality and had people – friends and strangers alike – travelling from all over to see their beautiful gardens. At first, they served every visitor (expected or otherwise) tea, and it is estimated that in 1915 alone over 18,000 guests were served! Among those fortunate, and frequent, guests were the past residents of the BC Protestant Orphan’s Home, or The Cridge Centre for the Family, as we are now known.

In 2006 both The Cridge and Butchart Gardens received Lifetime Achievement awards for our longevity and contribution to this community. In honour of the sharing of that award, Butchart Gardens donated all the revenue from their seasonal ice rink that year to our Seniors’ Centre. In honour of THEM, we put the money towards landscaping and named the lovely side garden the Jennie Butchart Garden as a token of our thanks, for the donation, and equally for Jennie’s compassionate support of the young children who lived here so many years ago.

Fast forward a few years and we realized that there was much more room for colourful flowers and plants than we had originally anticipated. After some research, the cost and time involved in filling out the garden was just too much. UNTIL two things wonderfully collided! Our department received a wonderful donation AND we had a call from a group of volunteers from Glad Tidings Church and Saanich Baptist Church who were participating in a Day of Service and wanted to do something for us.

Research was done, (many) plants were purchased, top soil was delivered, and the day arrived! For our garden project alone we had between 15 and 20 volunteers who distributed 5 yards of topsoil to the entire side garden and then planted over a hundred perennials in that space. And the day was magical. I was so inspired to see older generations of church volunteers teaching younger ones how to plant a plant, and everyone working so hard together for a big chunk of time to create something beautiful that we would never have been able to do on our own.

Please stop by next year in the early summer and walk by the Jennie Butchart Garden to see how a combined blessing made it into a space worthy of the name.

The Gift of Home
Scroll to top