Each April since 1995, British Columbia has observed Prevention of Violence Against Women week on the third week of April, this year falling on April 16 – 20. While this provincial observance still stands, there are, sadly, no provincial activities. Seeing this, The Cridge Transition House for Women asked ‘what more can we do’  to fight violence against women, and in turn we ask the community ‘what can/will you do?’

At the request of The Cridge Transition House for Women, Saanich Mayor Frank Leonard has proclaimed April 16 – 20 prevention of violence against women week in Saanich (Click here to view the proclamation). As the only transition house in Saanich, we are grateful for his endorsement. The proclamation will hang in its frame in The Cridge Transition House, providing encouragement to the over 200 women and children who either stay in the home or find safety by working with the house outreach worker. 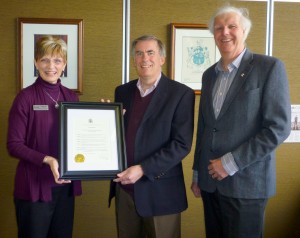 The issue of violence against women continues to plague our society. But there are things that each of us can do everyday, not just during this week, to make a difference. Here are a few suggestions:
• When you find yourself or hear someone else asking why a woman doesn’t  just leave an  abusive relationship, put the responsibility where  it belongs by asking instead, why doesn’t her partner just stop hitting her.
• When you hear the staggering statistics of the incidence of violence against women and the costs to our health care, justice and social systems, pay attention. Don’t get sidetracked by arguments that the reports must be wrong or that there are other issues that more urgently need  our attention. The fact is that too many women live in fear in their own homes. The needs of all the other social injustices do not make stopping violence against women a lesser priority.
• When you hear or see attitudes, words or behaviours that put women down and promote violence, do not be silent.  Boycott violence promoted as entertainment.  Speak up and speak out.
• When you hear the news about a woman being beaten or killed, do not allow it to be excused because that is what supposedly happens in her culture.  There is no cultural prerogative for abuse and violence.
• When you are wondering what the government’s funding priorities are, ask why transition house programs have been denied even small funding increases for over six years.  Ask what this says about government’s real commitment to stopping violence against women.
These are just a few of the many things that can be done to promote and advocate for women’s safety, respect and equality. If you are already doing something about stopping violence against women, keep up the good work.  Encourage those who are taking action alongside you and ask others to join you.  Stopping the violence against women is not only a women’s issue nor is it only a once a year campaign.  It is a call to action to everyone every day.  So, what will you do this week and every week to make our communities and province a safe place for all women?
https://cridge.org/wp-content/uploads/2015/06/cridgelogo-colour3.png 0 0 Shannon Whissell https://cridge.org/wp-content/uploads/2015/06/cridgelogo-colour3.png Shannon Whissell2012-04-20 02:55:432015-03-13 15:41:31Saanich Mayor Proclaims “Prevention of Violence Against Women Week”
Donate Now

In Memorium: Anne SpicerWhat’s in a Week?
Scroll to top